NEW ALBUM! 'Between You, Me, and the Trash' 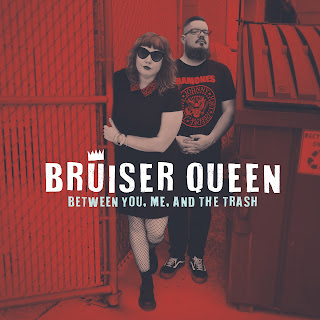 At long last, Bruiser Queen is thrilled to announce the forthcoming release of our new album, Between You, Me, and the Trash! Due on all digital and streaming platforms Friday, August 5 2022!

Is it the same album it would have been had it been completed before the world descended into utter chaos in March of 2020? There’s no way of knowing. Here’s what we do know: Bruiser Queen is back. They’re back with a massive new album, 'Between You, Me, and the Trash.' And if it sounds literal - it’s because it is. We see the duo (comprised of singer/guitarist, Morgan Nusbaum, and drummer, Jason Potter) popping off with more vigor and personal vulnerability than ever before.

Gone are the good-time sunshine vibes of 2017’s Heavy High (their most recent record to date). In its place sits loneliness, disappointment, sarcasm, and the scars of violence. Once gripping listeners with the raucous one-minute opener “Sound Check Song” - a staple of their recent live set - Bruiser Queen lays forth a landscape of what’s to come with “This City Won’t Take Us Alive.” Weaving together details of Potter’s bloody mugging outside a south city bar with accounts of her own automotive mowing-down as she attempted to cross the street on foot in broad daylight, it’s clear from the crack in her voice: Nusbaum’s had it up to here.

In early 2020, as the doldrums of global isolation set in, the band gave fans an early sneak-peek at the album’s direction, releasing dreamer “Crushing Out” and the autobiographical anthem, “The Wild Ones” as an EP of the same name. Listeners not only witnessed evolutionary growth in terms of song structure and expanded instrumentation, the band tipped its hand in terms of musical influence as well. We don’t ‘think’ they love late '70s/early '80s punk and '90s third-wave ska - we know damn well they do. Driving home the point is the EP’s closer, a ripping cover of Joan Jett and the Blackhearts’ “Bad Reputation.”

In an effort to capture this big new sound, Bruiser Queen enlisted engineer/producer/multi-instrumentalist Gabe Usery at Encapsulated Studios back home in St. Louis, MO. Usery’s touch can be felt throughout, but most notably on the cheeky “Drunk on the Internet” and mid-album crusher “Play Dumb.”

As much of a stretch as all this sounds, the band isn’t completely unrecognizable from its previous garage pop form, on display since their 2012 debut LP, 'Swears.' It’s clear they’re still somehow hopeful. It’s clear they still love heartbeat stomp doo-wop (see, “Heart Strings” and “Nobody’s Dream Girl”). And it’s abundantly clear Nusbaum’s powerhouse voice remains unmatched - even if she herself is a little worse for wear.