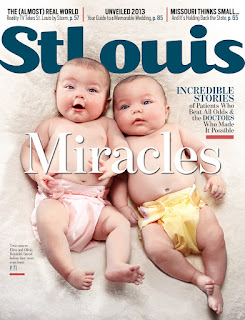 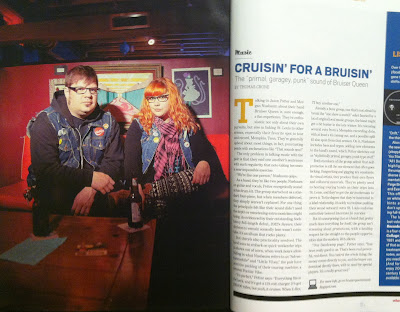 Talking to Jason Potter and Morgan Nusbaum about their band Bruiser Queen is, sure enough, a fun experience. They're enthusiastic not only about their own pursuits, but also in linking St. Louis to other scenes, especially their favorite spot to tour and record, Memphis, Tenn. They're generally upbeat about most things, in fact, punctuating points with exclamations like "That sounds neat!"

The only problem in talking music with the pair is that they end one another's sentences with such regularity that note-taking becomes a near-impossible exercise.

As a band, they're like two people, Nusbaum on guitar and vocals, Potter energetically seated at his drum kit. The group started out as a standard four-piece, but when members defected, they simply weren't replaced. For one thing, the principals felt like their sound didn't need the depth or sweetening extra musicians might bring. As evidenced by their outstanding, hook-heavy full-length debut, 2012's Swears, their decision to remain sonically lean wasn't a mistake. It's an album that rocks plenty.

But there's also practicality involved. The band loves to embark on quick weekender trips to shows out of town, when work hours allow. Riding in what Nusbaum refers to as "Adventuremobile" and "Little Vibey," the pair have aced the packing of their touring machine, a veteran Pontiac Vibe.

Already a busy group, one that's not afraid to break the "one show a month" edict fancied by a lot of original local music groups, the band might get a bit busier in the late winter: It's releasing several cuts from a Memphis recording date, with at least a 45 coming out, and a possible split 45 also spun from that session. On it, Nusbaum includes bass and organ, adding new elements to the band's sound, which Potter sketches out as "stylistically primal, garagey, punk-type stuff."

Both members of the group admit that self-promotion is still the one element that often goes lacking. Songwriting and gigging are constants. As visual artists, they produce their own flyers and collateral materials. They're plenty used to hosting touring bands on their trips into St. Louis, and they've got the air mattress to prove it. To the degree that they're interested in a label relationship, it's solely to continue pushing their sound outward: outta St. Louis and even outta their beloved Interstate 55 corridor.

But it's unsurprising that as a band that pretty much does everything for itself, the group isn't stressing about promotions, with a healthy respect for the straight-to-the-people opportunities that the modern Web allows.

"Our Bandcamp page," Potter says, "has been really good to us. That's been real powerful, real direct. You control the whole thing, the money comes directly to you, and the buyer can download directly there, with no need for special players. It's a really great tool."